We got back from our 2020 New Zealand trip just before the first UK lockdown in March. As for everyone else, that and subsequent waves of Covid have pretty much put paid to any travels — till now. In early June 2021 we came out from under our stones, blinked a bit, and set Tigger heading south along the Fosse Way into the wilds of Somerset.

You might think that an odd choice of destination. After all, we did live there for four years not so long ago. Well, we had a pressing reason to go back to travelling round this loveliest of counties…and here it is.

The Governor’s Man. Published 19 May, on Amazon.

Yes, I am now a published author. If you’ve followed our motorbike adventures round Europe in previous years, you’ll know I’m a mad Romanophile. I’d been writing my first Roman mystery for some time, and lockdown gave me the push to finish it, get it edited and then send my novel out into the world. Sharpe Books offered me a three-book contract, and here we are, on Amazon in ebook and glorious paperback. And all 5-star reviews, so far!

Almost immediately on publication in May, readers started asking about the places in Roman Britain mentioned in the story. Some, like Cunetio, are so tiny that people literally didn’t know they live and work above their Roman ancestors. The story sees action and increasing suspense from London, west to Bath, south to the Somerset Levels, and back up to Cirencester.

We needed no further excuse. We polished up Tigger, set the satnav for Somerset, and headed south.

Our travels were only for two days, alas. I was still nervous about the bugs, having shielded all this time. We booked a night at the Archangel in Frome, which had the great virtues of separation entrances off an open hall for bedrooms, and a very draughty dining room. But that single daring night away meant a lot of haring around on Tigger before and after, covering much of Somerset and up to Bath and Cirencester.

We even ended up trying several different places to film on the M4 bridge over the Severn, which is the setting for a quick dash up the Severn estuary by fast naval bireme for my intrepid heroes, Quintus and Tiro. The traffic noise on the old bridge was so overwhelming we had to settle for a quieter spot somewhat upstream.

We got the filming all done, and learned a lot about the process. If we ever do a video tour for subsequent books, they’ll be slicker and less exhausting, hopefully. So the next step was to select the best pieces of film – all very short, around a minute – then set up a YouTube channel. That’s all done now. We have a mini-series set in each of twelve places around the Roman south-west, following my heroes’ journey and giving readers a bit of historical background of these real places. If we get a chance, we’ll do another quick dash to film at Silchester and places on the Roman road to Bath. There’s a headless body to be explained …

It was great fun, although quite a job learning from scratch how to do this. We were even lucky with the weather, The series is now launched on my YouTube channel “The Governor’s Man by Jacquie Rogers”. The first episode, with me introducing the tour, is already up and streaming. The other episodes will follow weekly, at 9pm UK time on successive Fridays through to the end of September. I’ve added short notes to each – just click the drop-down arrow at the bottom right hand corner of the screen.

You can search for the channel by name, or click here for the first episode. Please do subscribe to the channel, let me know what you think, ask any questions ( I can’t promise to know all the answers!). And enjoy Tigger’s adventures along Britain’s Roman roads. I’d be delighted if you read the book too! Do leave a review on Amazon if you enjoy The Governor’s Man. I’ve begun writing the sequel for publication next year.

Until the next trip, hopefully to France (Gaul) and onto Rome next summer.

It’s spring. It’s sunny. We’re back on the faithful Tigger. We have smart new leathers, and Tigger is swanky with her new screen, Continental TKC70s, and funky slimline exhaust. This year we’re setting off to cross southern Europe in six weeks. Destination Albania, maybe further.

All depends how many irresistible cafés distract us.

First stop is Bilbao on the north coast of Spain. We’re doing that leg the lazy way, Brittany Ferries from Portsmouth. All aboard on 9th May – I can’t wait!

Followers of our travel blogs will know that in 2017 our Fifth Son married a bright and lovely Vietnamese lady, Kim. That trip, and our associated travels to Malaysia, are covered in our 2017 blog: Far East Travels. Fifth Son and beautiful wife have now moved to New Zealand. We didn’t need a second invitation. The trip begins at Birmingham Airport next week.

But first, an apology and a word of explanation … Just before Christmas, the Rider broke a metacarpal in his left hand. Yep, the clutch hand.

The medics sucked their teeth, saying 10-12 weeks to heal. No problem, said the Rider. This is my metacarpal. 6-8 weeks max, nicely in time for arrival in Christchurch.

Then the Rider broke the same bone again. Turns out that bone had originally been broken thirty years ago, by a thoughtful Rugby forward in a maul, who was merely putting a mouthy back in his place. And being a mouthy back, the Rider never had the bone set properly. If you look carefully at the X-ray, you can see the zigzag.

So, no healed fracture, no biking round New Zealand. We will be doing it the conventional way on four wheels. Sorry about that. But please bear with us – it’ll still be fun. Guaranteed. Come along for the ride, and maybe we can include pix of other bikes along the way (sob).

If you’re enjoying this travel blog, you might also like my writing/book blog. Go to jsrogers.blog for news, views, reviews, tasters, and links to my published stories and novels. 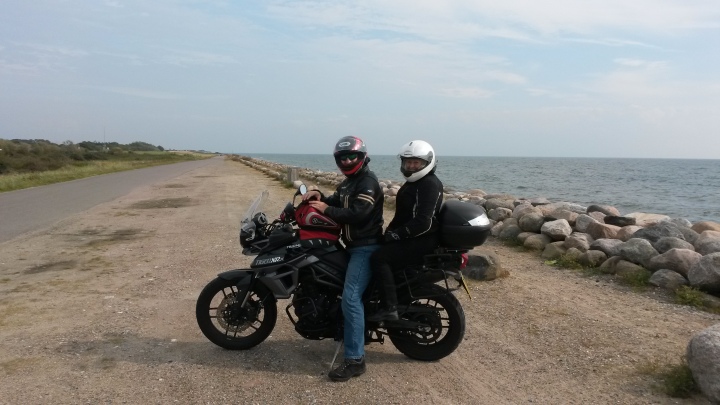 Europe … the final frontier. These are the journeys of the Triumph Tiger 800 XRx. Her four-week mission of August 2016: to explore strange new countries; to seek out new friends and new watering holes. To boldly go where no Tiger has gone before … before they close the borders.

Meet the Tiger’s intrepid crew: Rider Peter and Pillion Jacquie. Follow us as we wend our way slowly round northern Europe, fleeing torrential rain and seeking ever a cheaper place to stay (and of course a café or bar with room for Tigger).

We hope you enjoy our blog. Do add your comments if our odyssey brings back memories of your own motorcycling adventures, or prompts plans for your future travels. If you’d like to read more, see Jacquie’s other blog about her writing, book reviews, links to published stories and stuff about what’s going on in the world.

These are the further adventures of Rider Pete and Pillion Jac, as we find our way in and around Viet Nam and Malaysia, September 2017. Come with us as we survive leeches, enjoy wonderful food, experience exotic encounters (and drinking sessions with Aussies), endure apparently endless hot rain … and weddings. Plural.

If any Tigers feature in these pages, they’re not likely to be the Triumph variety. More the stripy scary sort, we’re told. We’ve got our fingers crossed they’ll be more frightened of us than we will be of them.

I haven’t mentioned coronavirus in this blog so far, for the simple reason that we both feel that keeping calm and washing our hands are the only urgent actions we need to take. However, we were due to travel back via Dubai, where tensions were apparently rising. So we had been looking around for some time to buy face masks, to keep the good denizens of UAE reassured. Especially as I still have a cold.

END_OF_DOCUMENT_TOKEN_TO_BE_REPLACED 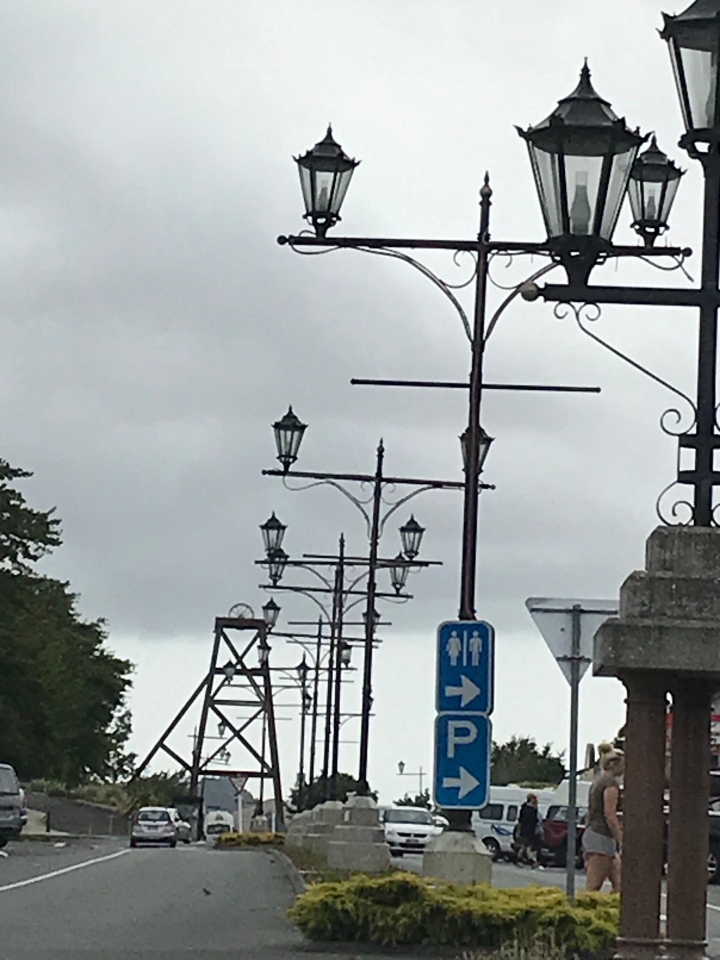 The next day we drove inland, to Waihi town, a neat little place with a pleasant open boulevard of trees down the Main Street, and some pretty colonial buildings, including the old library. Don’t worry – there’s still a library here, just moved into newer premises round the corner. We had our morning flat white, and began to explore.

We realised very quickly that Waihi is not your average little town, oh no sirree.

END_OF_DOCUMENT_TOKEN_TO_BE_REPLACED

We had three days left before our flight home out of Auckland. We could have dashed straight to New Zealand’s only big city; but we were tired, and in need of some chillout time. And it occurred to us we had seen very little of New Zealand’s amazing coastline. A trip to the seaside was called for. By sheer chance, we chose one of the most contradictory and fascinating towns in New Zealand to dabble our feet in the briny.

END_OF_DOCUMENT_TOKEN_TO_BE_REPLACED 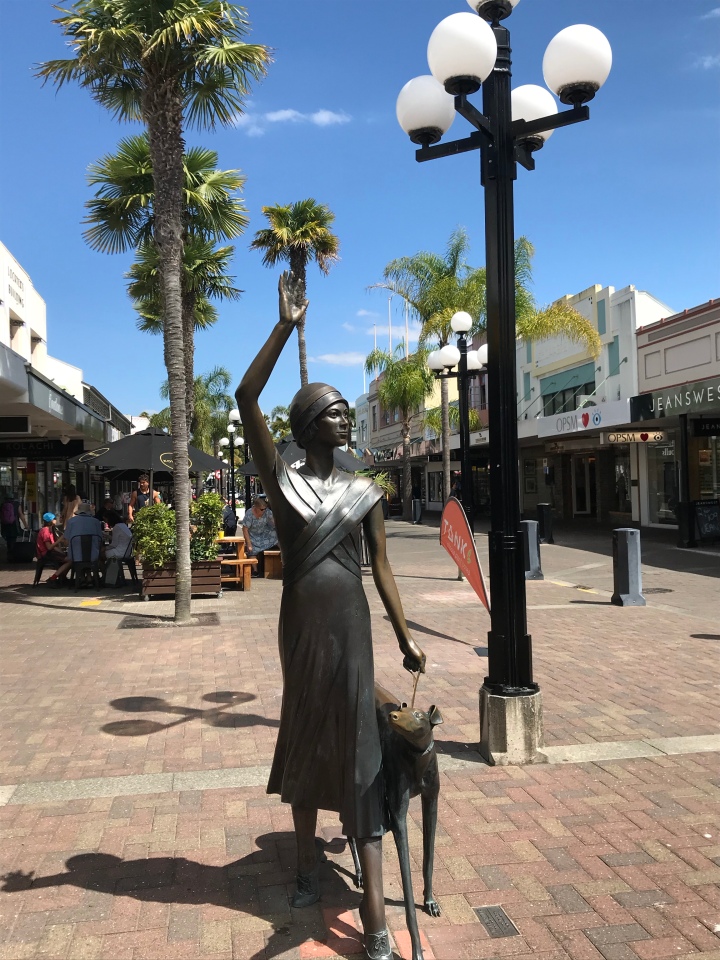 The remarkable little port of Napier on the east coast of the North Island was devastated by an earthquake in 1931, and rebuilt as a cameo of Art Deco. It’s unique, and very special, and ought to qualify for UNESCO World Heritage Status.

END_OF_DOCUMENT_TOKEN_TO_BE_REPLACED

…in 2017 was Greytown in the Marlborough wineries district. So here we are in Greytown. It’s the longest established town in the Wairarapa wine-making region. We’re here purely to celebrate the beauty, nothing to do with the wine.

END_OF_DOCUMENT_TOKEN_TO_BE_REPLACED

This is a text widget, which allows you to add text or HTML to your sidebar. You can use them to display text, links, images, HTML, or a combination of these. Edit them in the Widget section of the Customizer.